I am excited to be exhibiting work for the PolArt Festival in Adelaide along with family members Wlad, Ludwik and Adam Dutkiewicz. The exhibition also includes works by many other artists of Polish origin working in Australia today. Click on the Link below for more details. Open from the 29 December until 10 January 2010 at the Royal South Australia Society of Arts.

During the Tree of Life workshops I had the good fortune to have Catherine Acin documenting the Housing Week Project. Gasworks Arts Park has mounted a photographic exhibition of some of the amazing photos she took. The Tree of Life Housing Week Photographic Exhibition opens Tuesday 22 of December until January 10th. You are invited to the opening at Gasworks Arts Park Foyer Gallery from 6 pm untill 8 pm on the 22 of December at 21 Graham Street, Albert Park. Gallery hours 9 till 5 daily. Photo by Catherine Acin. 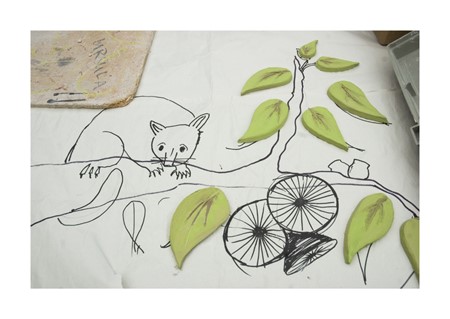 Join me for a Tour of the three Housing Week ‘Tree of Life’ public art ceramic murals on Saturday 28 November 2009 at 11am. The walk starts at 306 Dorcas Street, continuing along to Emerald Hill Place to view Layfield St and finishing at 25 Church St, South Melbourne. Below are pictures of two of the finished murals. 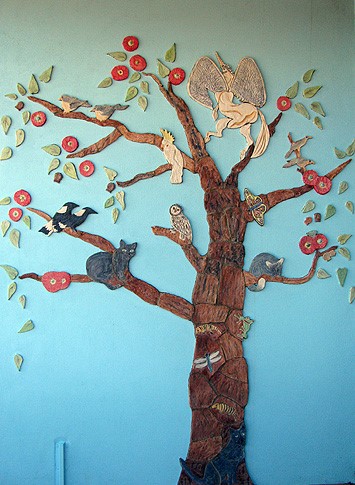 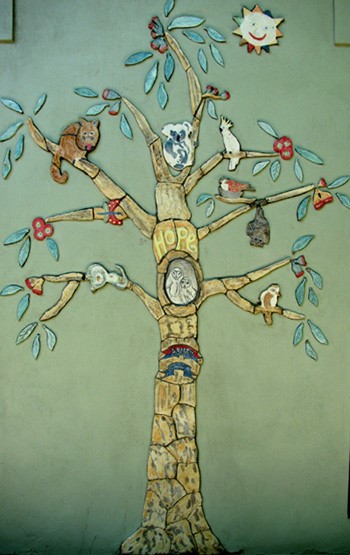 Last night an exhibition opened in Adelaide at the Nexus Gallery featuring the paintings of my father Wladyslaw and his brother Ludwik Dutkiewicz. The night also included the launch of another in the series of books my brother Adam has written on Modern Art in South Australia. For information about the books go to www.moonarrow.com Exhibition details are below.

Works by Wladyslaw and Ludwik Dutkiewicz

Post-World War Two Polish migrant brothers Wladyslaw and Ludwik Dutkiewicz held their first Australian exhibition in Adelaide in 1951. Pioneers in the use of abstraction in Australian painting, the brothers were essential contributors to modernism in Adelaide and Australia. Brothers in Arts has been curated by Wlad’s son, 2008 Nexus Writer-in-Residence, Adam Dutkiewicz.

The ceramic mural commissioned for Blackburn Pre-School has been finished and installed. The children gathered around enthusiastically to see what was happening during the installation process and are all very excited. The brightly colored picturesque carving adorns the wall as they enter the school and will certainly be a great welcome as they arrive. 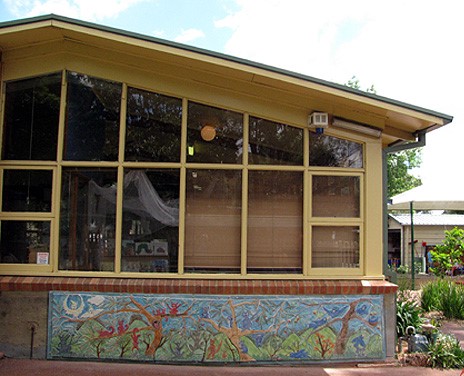 I have had the good fortune to be working on a “Tree of Life” public art project which brings together community housing tenants and members of the wider community. We are designing and making three ceramic tree murals as part of Housing Week 2009 and the project is supported by the State Government of Victoria, South Port Community Housing Group, Gasworks Arts Park and is facilitated by Martin Foley, the State Member for Albert Park. It is fantastic to have everyone supporting me to create the trees at three of the SPCHG’s rooming houses. The process is proving to be a lot of fun and the making days include a BBQ which is really adding to the flavor of the occasion. The project received funding from The Office of Housing, Vic health and the City of Port Phillip and is auspice through the Gasworks Arts Park. Below is a picture of me with a simple plan I took to one of the houses to inspire participants. Stay tuned for more updates.

You can join me for a Tour of the three “Tree of Life” public art installations on Saturday 28 November 2009 at 11 am starting at 306 Dorcas Street continuing on and finishing at 25 Church St, South Melbourne. 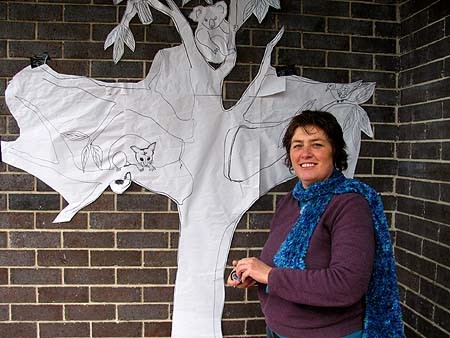 Today the fabulous Bodhi tree ceramic mural made with the Dharma club children and parents at the Tara Institute Buddhist Center was launched. I unveiled the mural which then received a special blessing from several of the Buddhist monks. My thanks to the community for making me so welcomed and especially to Jenny, Grace, Claire, Miles and Tess for all there help in the making of this magnificent tree. This was a heart felt project for me and a great honor to be a part of such a wonderful creation and community.

I am very excited to have received a commission to create a ceramic mural for the Blackburn Pre-School. The mural is four and a half meters long and will adorn an outside wall near the entrance. The mural is to be installed low to the ground and is going to be carved in order to make it a tactile experience as well as a visual one for the children. Here is a picture of the first section as I am painting it giving you a sense of what the completed work may look like. I am enjoying creating the mural and believe the children will love arriving at the pre- school to be greeted by this bright and colorful mural. 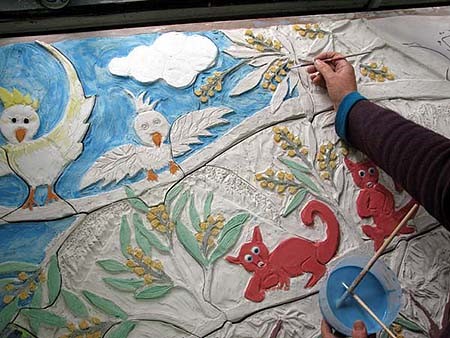 Through a chance and fortuitous meeting recently I had a fantastic opportunity to create a ceramic mural of a Bodhi tree with children and parents at the Tara Institute Buddhist Center. On my first visit I explained and demonstrated the processes we were going to use, the children then drew pictures and cut them out  sticking them on a life size drawing of the tree on the wall to get a sense of how and what we were going to make. A month later I returned for our creative making day along with about sixty children and parents. In about a four hour session we created all the pieces that went together to make a magnificent colorful tree full of animals, birds and leaves. There are several shrines in bedded in the trunk that when finished will house sculptures of the Buddha. The tree will adorn the walls of the Dharma Club a space were children from ages 4 to 15 gather monthly for fun activities and to learn about a healthy life. Below is a picture of the tree before we added the leaves and I will post a picture of the finished tree soon. 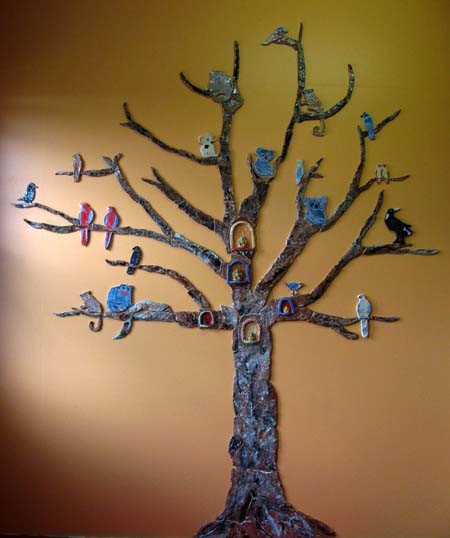 Currently I am busy making sculptures for the Biennial Gasworks Artists Exhibition. The show curator is Rebecca Coates whom is working collaboratively with us to create an exhibition that explores responses to water, both in a micro and macro scale. The show opens on Thursday September 10th from 6 till 8pm and runs through until the 27th of September. Gallery hours are 11am until 5pm each day at the Gasworks Arts Park Theatre: 21 Graham Street, Albert Park. Below is a picture of me busy finishing off a large sculpture for the exhibition. Installation View from the exhibition. Photograph by Jeremy Dillon. 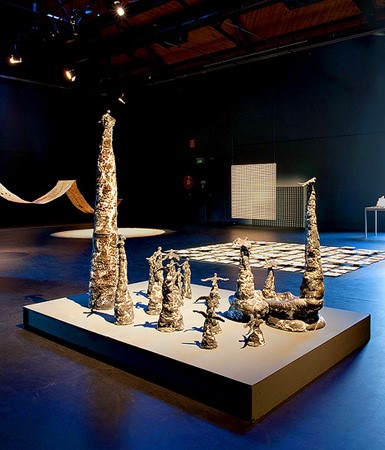 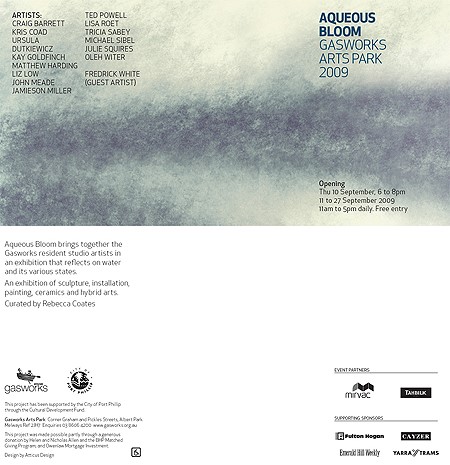 The next Gasworks Open Studios are to be held on October 1st from 5 until 6.30pm. My Ceramic Studio will be open as well as Visual Arts and the Sculpture Studios. Grab a glass of wine and wonder through the park from studio to studio viewing and speaking to the fifteen artists about their work and current practice. This is always a fun and informative event and well worth a visit. Hope to see you there. 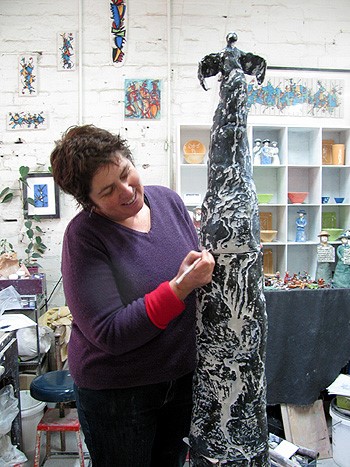 The Gasworks Arts Park held its annual ‘Story Festival’ on September 12th. It was a fantastic event although a tad windy. I ran a ‘play with clay’ workshop which over two hundred children took part in, making fantastic clay creations they could paint and take home. 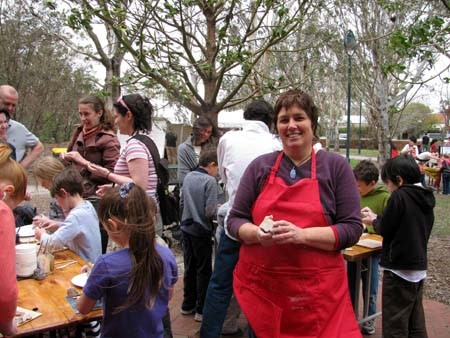 I spent most of first term this year as the artist in residence at the Brunswick North Primary School. Along with students and members of the school community we created a ceramic mural titled “One History-Many Cultures”.  The work used themes incorporating the rich history of the area including that of the Indigenous people, its cultural diversity and life in Brunswick today. The end result is over two hundred and twenty wonderful tiles illustrating the ideas the students came up with. My thanks to all those that  supported the murals creation especially to Bill Gribben the art teacher, members of the organizing Committee, parents and friends of the school and the Principle Sonia Abdallah. Here is a picture of some of the fired tiles. 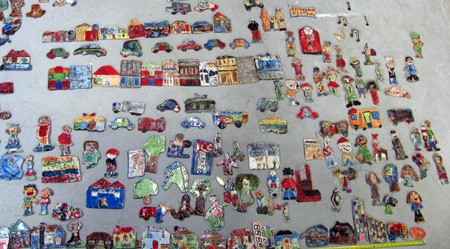 I recently spent a day running play with clay workshops at three of the schools affected by the Victorian bush-fires earlier this year. This is part of a series of workshops organized by Books Illustrated and coordinated by Berry Street (an Independent Child and Family Welfare Organization). I was fortunate to take part in a day of activities that saw me racing from school to school and working with the students making fantastic tiles and having fun. Those wonderful colorful clay creations are now fired and glazed and will be returned to the children to take home. I would especially like to thank all those whom made this day possible including Anne Haddon and Anne James at Books Illustrated, Cindy Ferguson the Community Arts Worker at Berry Street, Brunswick North Primary School for their generous donation of clay towards the workshops and Gasworks Arts Park for their sponsorship via the firing of the tiles. 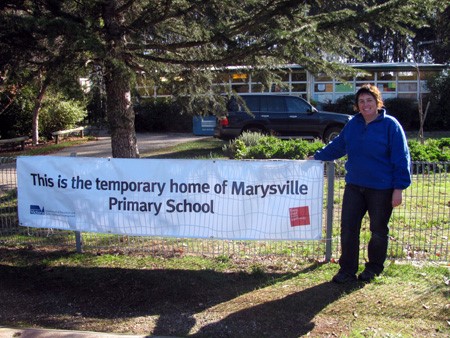 The Art of Suff-Rage traveling art installation is currently on show at the Portland Art Center. My one hundred ceramic suffragist sculptures are on display as well as Fern Smiths banners and paintings celebrating the Centenary of Victorian Women gaining the vote in 2008. Portland was the birth place of Vida Goldstein the international renowned Australian suffragist.

Queen Victoria Women’s Center is hosting an exhibition centered on Women Barristers to coincide with Law Week. Fern has several paintings on show referencing women’s participation in Law and I created a sculpture of Flos Greig the first woman to graduate law at Melbourne University.

Wow! This mural really adds color and life to the flat grey exterior of this building. I was commissioned to create a large ceramic wall mural with participants and staff at MacKillop Family Services in Footscray. The project really has had a fantastic outcome and everyone involved seems to be happy with it. The mural now adorns the outside wall adding a colorful and playful view to the community room. Most of the mural was made during a week long workshop in January and then finished off during a number of extra sessions with interested participants and staff. I really enjoyed facilitating this workshop and would like to thank all those who took part in its creation and supported the process. 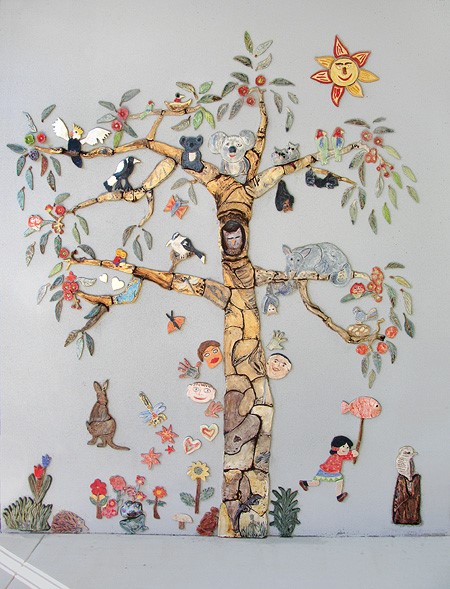 2009 is promising to be a busy year for me starting with a commission to create a large ceramic wall mural with the participants and staff at MacKillop Family Services in Footscray. In addition first term sees me as the Artist in Residence at Brunswick North Primary School and together with the students we will be making a ceramic mural to embellish the walls of the assembly area. Further more I have a private commission to create a sculpture for an Adelaide garden which I am really looking forward to working on.

2008 was an eventful year with The Art of Suff-Rage traveling art installation in partnership with fellow artist Fern Smith. The project was developed to celebrate the centenary of women gaining the vote in Victorian. This year sees more opportunities for the installation to continue on its adventures. I will be exhibiting a sculpture from the series at the Counihan Gallery “Women’s Salon” Exhibition in Brunswick from February 20th until March 15th. The “Stories of Hope” exhibition “seeks to explore the positive ideas, stories and things that sustain us and give us hope, even in the darkest times”. The installation is then on the move to Regional Victoria with an Exhibition planed for the Portland Art Center from 24 May to 19 June.

Look out for more updates in my News pages as they come to hand.