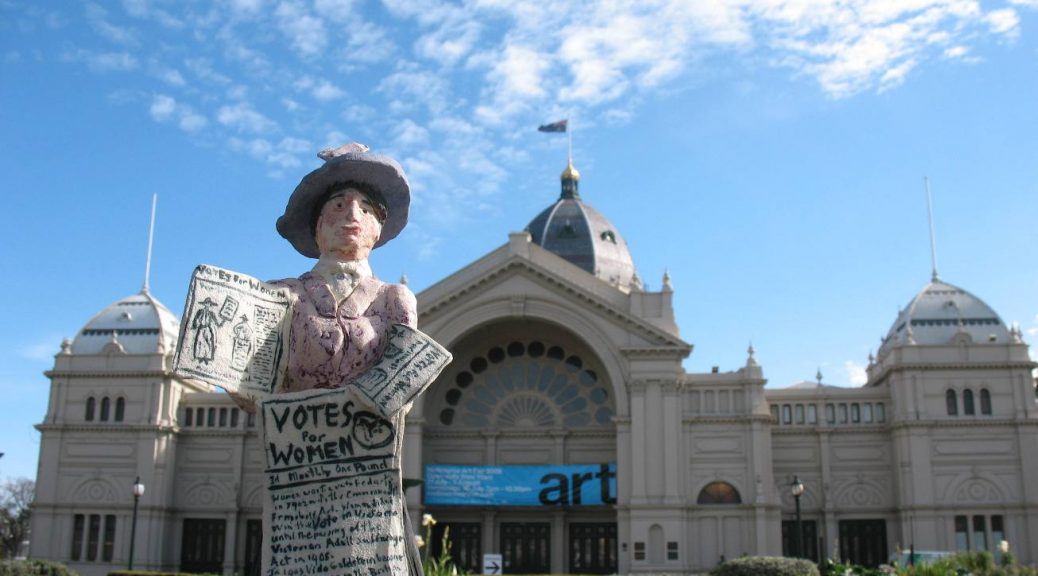 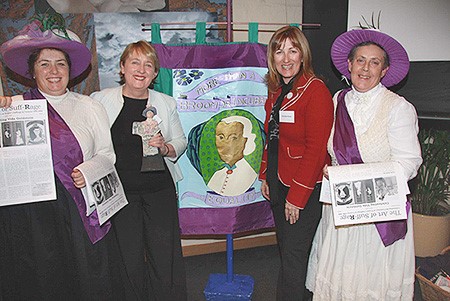 Fern and I attended the Nillumbik Women’s Network Spring Forum “Nillumbik Women Speak Out”. We were dressed as suffragists and set up a small display fromThe Art of Suff-Rage traveling art installation. This was a great event held in the fantastic Eltham Community and Reception Center. Young feminist historian, Dr Natasha Campo opened the forum with a presentation on the journey for women gaining the vote in Victoria while exploring what we can learn from their experience. “If women in Nillumbik municipality were to prepare a petition to local, state and federal parliaments today- what would      be the demands?” Six local women had been invited to get up on a soap box and respond to this question from their particular standpoint. These included a young woman, an older woman, and a woman at home caring for children, a woman with disabled children, a woman juggling children and career. Federal and State Parliamentarians, Jenny Macklin and Danielle Green responded to the key themes and priorities emerging from the speakers. A particularly moving moment was when Donna Zander spoke of the impact of Domestic Violence on her life and asked her ‘Silent Partners’ to come forward, during the course of her talk fifteen or so women, who had also experienced violence joined her on stage. The outcome of the forum was yes we had come along way since women got the vote but there is much work still to do in the fight for equality. We would like to thank the Nillumbik Women’s Network (especially Mandy Press) for the warm welcome, the hot soup and also the courageous women who spoke out sharing their stories. Photograph curtsey of the Nillumbick Women’s Network of Ursula, Jenny Maklin, Danielle Green and Fern. Photographer Tara Frichitthavong.

Warm welcome from the “Women of Euroa” 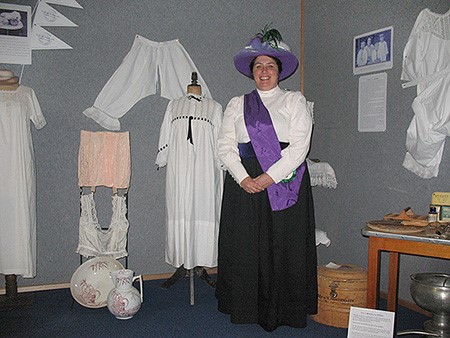 Last Thursday I traveled to Euroa with The Art of Suff-Rage to be a guest speaker for one of their monthly “Women of Euroa” group dinners. The event this month was to celebrate the Centenary of Victorian Women Vote. Over ninety women ventured out on a cold evening to participate in the festivities. The menu was specially designed for the event and based on the recopies of Mrs. Beaton. The MC for the evening was Claire Penniceard and guest speakers were locals from the area Roby Machin, Sherryn Browne and Laura-Jane Corker. The Euroa Historical Society set up a fantastic static display with items from the turn of the last century. I would like to thank the Women of Euroa for their very warm welcome and fabulous hospitality. This event was supported by Euroa Health, Srathbogie Shire Council, State Government and Victorian Women Vote 1908-2008 ( Knowing our past, transforming our future). 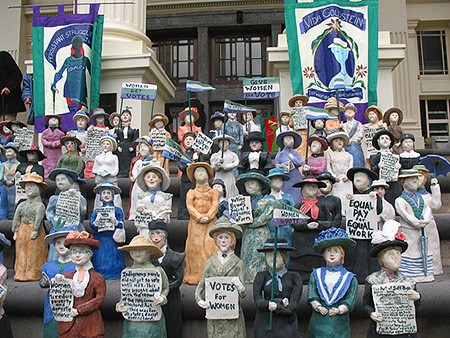 The Art of Suff-Rage Vida Goldstein celebration was a great success enjoyed by all. Fern and I would like to thank all those who ventured out on a cold Melbourne day to join in the celebrations. There was a warm welcome from the Mayor of the City of Port Phillip Janet Cribbes followed by Wilma Farrow’s entertaining performance as Vida. Members of the St Kilda Historical Society filled us in on what was happening in1908 the same year women won the right to vote in Victoria. This event was supported by Gasworks Arts Park and we thank the staff for all their help and encouragement especially Crusader Hillis and Jane Chilsome. 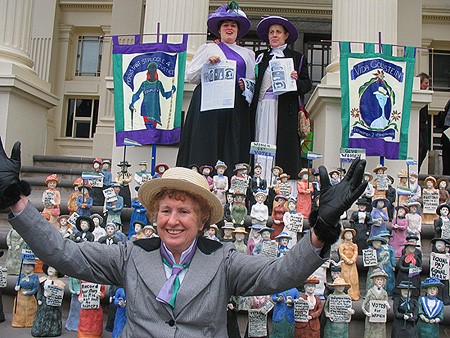 Vida Goldstein at the Exhibition Building 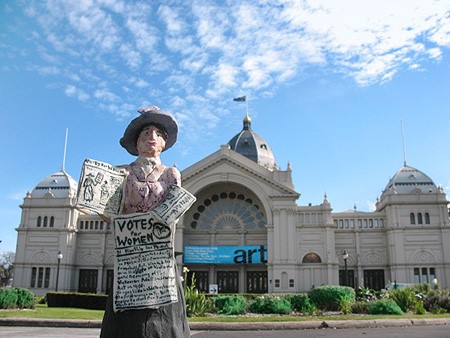 Part of my quest this year for The Art of Suff-Rage project is to photograph my Vida Goldstein sculpture in places that were relevant and significant to her life as well as to women of the day. Some of those places include Parliament House, Trades Hall and the Exhibition Building. In 1907 an Australian Exhibition of Women’s Work was held at the building and it is said up to 16,000 exhibits were on display. The massive exhibition included painting, sculpture, pottery, sewing and needlework. The signage for the Melbourne art fair was an added bonus to this photo.The building also housed the Victorian Parliament for some years as the Federal Parliament was in the Spring Street building while the National Parliament in Canberra was under construction. 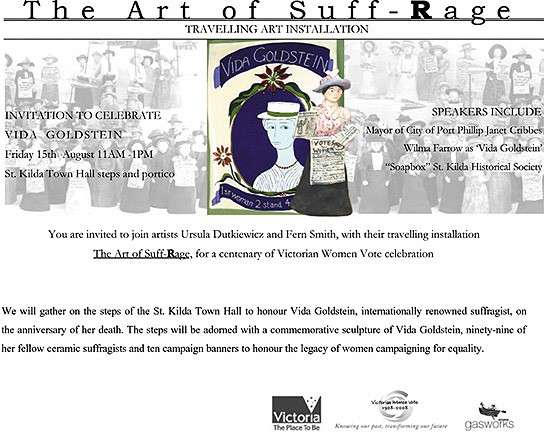 August 15th sees an opportunity to view The Art of Suff-Rage traveling art installation for a one off special event in celebration of Vida Goldstein. Vida was one of Victoria’s most colorful and courageous suffragists whom passed away forty nine years ago on the 15th August 1949. We have chosen this significant date during the Centenary of Women’s Suffrage in Victoria to honor her achievements. Fellow artist Fern Smith and I will be on the steps of the St Kilda Town Hall with our installation and special guest speakers between 11AM and 1PM on that date. We will be dressed as suffragist with a special edition of The Art of Suff-Rage newspaper in celebration of her outstanding contribution to gaining universal suffrage for women. My one hundred ceramic suffragist sculptures will be on the steps and Ferns ten commemorative banners will be on display.